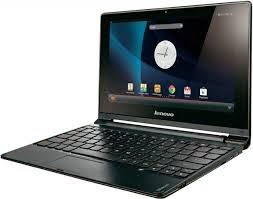 The tablet is undoubtedly among the most affordable computing devices you can buy these days. But they are not very good with productivity as they do not have keyboards and are not built to take on high-powered tasks.
But then the Lenovo IdeaPad A10 is different. It is an Android multi-mode tablet which you can use in a laptop mode with its keyboard and in a stand mode where the touchscreen is more dominant. But it is Android and does not run a conventional desktop OS. The concept is not new. However, all the so-called tablet hybrids till now were quite expensive and ran Windows.
The IdeaPad A10 is priced at Rs 19,990, where there are hardly any challengers for the device. If there is one challenger that is the Acer C720 Chromebook, priced around Rs 22,000. Both run operating systems developed by Google, but are in no way similar. In fact, I think the IdeaPad A10 is better than the cheapest Chromebook. Here are five reasons why:
Design
The Ideapad A10 has a distinct advantage over the Chromebook as far as design is concerned and that its portability. The Chromebooks are portable too, but then the A10 is lighter and thinner. The Acer C720, for instance, weighs a shade over 1.4 kg and has a larger screen size of 11.6 inches. With a smaller 10.1-inch screen, the A10 is lighter at just a kilogram. But if you want the larger screen, you might need to look at the Chromebook again. The Chromebook also offers more connectivity options than the A10, which is essentially a tablet. However, the A10’s multiple modes means it is much more convenient to use. Sadly, there is no pure tablet mode like in the earlier hybrids.
Operating system
The Chromebook is actually a browser that does everything for you. It gives all the option an average user might need without actually installing anything on the device. But there are a few things you cannot do on a Chromebook, like Skype which is still not available on the Chrome store. The A10, on the other hand, runs a full-fledged Android 4.2 OS and there is no dearth of apps you can download and run on the device. You can run all the apps you would on the Chromebook and much more. You can also save stuff locally, which the Chromebook does not do as a default. However, remember that all the apps you download are mobile versions and not full desktop software.
Processing power
The A10 has better processing power than the Chromebook for the simple fact that it has Rockchip RK3188 Cotex-A9 quad core processor which is better at multi-tasking and power saving than the Acer C720’s dual-core Intel Celeron processor. Plus, this offers better graphics as the Mali 400 GPU has been included keeping in mind users who might want to test out Android games. On the Chromebook, each process is basically a new tab on the browser. The A10 offers full Android multi-tasking. The battery life is also better in the A10 and will give a couple of hours more than the eight hours on the Chromebook.
Touchscreen
The Chromebook does not have a touchscreen as it is more of a laptop than a tablet. The A10 is without doubt a tablet and works better with touch. In fact, some features, like unlocking the screen, work only with the touchscreen. But the touchscreen is a great advantage for a lot of users, especially those who will be using this more as an Android tablet for gaming and other apps. We would have loved if there was a 360-degree fold option, like in the Lenovo Yoga, to give it a tablet only mode.
Price
If we are talking about bringing down the entry barriers then the price is definitely a factor. In this case, the A10 is at least 15 per cent cheaper than the cheapest Chromebook, the Acer C720. And it is not just about a cheaper price tag. The A10 offers more features for the price, the touchscreen and the multi-mode design just being two of those. This is not taking away the fact that the Chromebook is still among the most affordable computing devices available in the market.
--
For installation, troubleshooting and upgrades contact www.bigfix.in