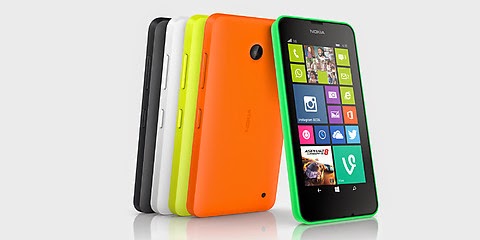 For someone using Microsoft Mango for the last few years, 8.1 is definitely an upgrade.  But there is nothing out of this world about the Lumia 630 dual sim that would have us bouncing off the walls.
Design
What are the chances of Lumia 630 knocking this out of the park? Zero. Zilch. Nada. Yes, the phone looks like any other Lumia.
The rear plastic flap is easy to remove; easier than peeling a banana. The speakers are at the bottom right and are covered by a pinhole on the flap. The phone’s power button lies right below the volume control. And Nokia ditched the capacitive buttons of the previous models for on-screen buttons.
Display and software
The Lumia 630 comes with a 4.5 IPS LCD screen supporting a resolution of 854 X 480 pixels. The screen is guarded by a coat of Gorilla Glass 3, but it heavily reflects smudges.
The Windows 8.1 live tiles look, as always, fabulous and there is a new addition called the notification bar to the action centre. Another addition is the Word Flow feature that allows you to swipe rather than type a message.
Storage and Performance
The phone is equipped with an 8GB internal storage, and it can be extended up to 128GB.
It is powered by a 1.2 Ghz Snapdragon 400 Quad Core. We did not experience any hiccups with the Lumia 630. Things ran smoothly despite the 512MB RAM and that is where Windows has been able to score over Android. However, for some inexplicable reason, the Lumia was not detecting the closest WiFi router in our building despite picking up the ones far away. The phone does not drain the battery quickly and it is good for a day of basic use.
Camera
For those whose day begins and ends with a selfie, they will have to turn the phone turtle and use their imaginary photo grid instead. By doing away with the front camera, it seems like Nokia frowns on those caught up in the whirligig of duckface selfies. They have thus, in all probability, chose to deny millions of their right to master that perfect pout.
The remnants of this, probably, cost cutting measure is a no-frills 5MP camera that records at 720p quality.
Verdict
The 630 is a good addition to the Lumia stable despite the minor tweaks and improvements. It has its faults and the price bracket does not give it much room to appease the most demanding of customers. People nowadays want all features a designer could cram into a smartphone regardless of whether they use it or not.
-----
For troubleshooting, support and repair of Lumia 630 login to www.bigfix.in