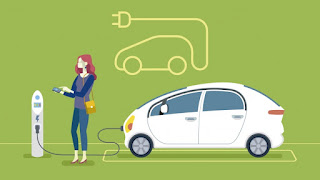 The future of electric vehicles (EVs) in the world is bright .The similarities between electronic companies and EVs run deep.

Key components of an EV can be assembled in modules, like a video game player or a phone. An EV runs on a lithium-ion battery, just like almost every mobile device. It has an electric motor, which these companies also know well.

Sony's Vision-S, like other cars now on the drawing board, is meant to fuse seamlessly with a user's mobile phone. The Vision-S's doors can be opened with an app, a feature already found on today's all-electric Teslas. Approach the car watching a video, and that video ports automatically to the car's video screen, which runs the entire length of the dashboard.

That door trick is an act of electronics, experts points out that the traditional auto door is mechanical: Pull on the door handle, which slides a cable, which opens the latch. But a door meant to open by smartphone would replace the cable with an electronic actuator. The same "drive by wire" systems are evolving for other systems, from steering to brakes.

Then there's all the driver assistance technology, whether it's to parallel park the car or brake for hazards. Each function relies on a thicket of electronic sensors.

Sony's Vision-S has 33 sensors in and around the car, including 12 cameras, as well as devices that measure distance, including ultrasonic devices, radar and lidar.

Add all that up — the actuators, the video screens, the sensors — and the electricity demand becomes formidable. An EV, is better suited to provide all that juice than a traditional car's low-voltage starter battery.

It's also a vast business opportunity for electronics makers, which either produce or are adjacent to every one of those components.

For decades, these companies have been making audio systems and the interfaces to control functions in the car. Now they're seeing ways to embed themselves far deeper.
---
https://app.bigfix.in has plans to add EV charging point installation, troubleshooting and maintenance to this service category.